Parish Pumpery is a phrase that’s sometimes used in a disparaging way by people complaining about getting bogged down in the minutiae of everyday life.

It comes from the fact that all life in villages and many other communities come to that, once came passed the parish pump. It was where people not only came to get their water, but to meet and chat and gossip. Most pumps are now long gone, or just sit there as a nod to the past and very few still work.

Well that’s changing in the tiny village of Rotherby where a pump dating back to the mid-eighteenth century is getting some loving care and attention.

This is a picture of the restored Rotherby Pump. A significant piece of work, brought about by the commitment of the Parish Council to restore the village pump, a grant from the Quintas Community Fund and the skill of local Rotherby craftsman, Alan Odom.

The pump before restoration

On 28th January 2017, Parish Clerk  Vic Alsop and Parish Councillor Mike Tilling formally announcing the work to restore the pump and giving a vote of thanks to the work done.

Rotherby residents’ the youngest George Fawke, Margaret Musson and oldest Vi Spencer making use of the restored pump. Margaret lives at 3 The Row and as a little girl she used to be sent by her mother to draw water from the pump.

The Restoration of Rotherby Village Pump
(written by Alan Odom)

Rotherby village pump has, sadly, suffered a fair amount of neglect over the last forty years, since any work was last done to the pump. It is believed that the pump has not worked since 1946, when mains water arrived in the village. It is understood that the water board at that time “put it out of commission” to prevent villagers using the pump instead of paying for water from the new mains supply.

These two pictures illustrate the decline suffered by the pump, including damage from a vehicle colliding with the spout and case. It was decided during the summer of 2016 to restore the pump to at least a visually pleasing look, even if it could not be made to work once more. Following meetings at the Parish Council, a budget was allocated for the works and quotations requested. During September 2016, a contract was awarded to Rotherby craftsman Alan Odom, who had provided the council with a 3D model showing his proposal for the new case as below:

This quotation was accepted by the council and work commenced in September, with the removal of the old, rotten case. The budget and contract terms did not include getting the pump to work again as a specific requirement, but a “nice to have” if at all possible. This would be dependent on being able to remove the old workings from the lead pipe, replacing same and more importantly, on there being water in the well.

The front panels were removed from the case and the full extent of the damage to the lead pipe and spout became apparent:

Not only was the end of the spout damaged but also the top plate was considerably deformed. In addition, there was black paint on the spout that would need to be removed. The case was then completely removed and the wall behind the pump cleaned with a stiff brush. The trough in front of the pump was also cleaned out, its contents included several bricks and a few years worth of debris.

The first job undertaken was the cleaning and re-shaping of the pump tube and spout. This could not be removed from the ground so the work was done in situ. A blowtorch was used to gently heat the spout end so that it could be straightened out using steel forming tools and a planishing hammer. It was possible to get the spout back to its original shape. Next the top plate was also gently heated and pressed back into shape using steel plates and a “G” clamp. Again it was possible to get the top plate back to its original shape although there remained some surface stress cracks where the lead has been folded particularly tightly. These were repaired using a blowtorch to melt some lead into the cracks.

Next, the black paint was removed using a blowtorch to heat the paint to such a temperature that it could be easily removed with a brass wire brush. This tool was chosen so it did not unduly mark the surface of the lead. Once all the paint was removed the whole pipe and spout was cleaned using a green scouring pad and a commercial kitchen cleaner, with plenty of water. This process took around 3 hours and resulted in a smooth finish.

Once all traces of the cleaner had been removed, the pipe and spout was treated with patination oil to preserve it for the future.

Next the plunger had to be removed. It could not be withdrawn without considerable “persuasion” from a crowbar. This was used mainly to turn the rod as it was slowly withdrawn.

Once out it was discovered that the original “bucket” was broken in half and beyond repair. Also, the leather washer and clacker valve were missing and presumed lost when the pump was put out of service in 1946. However, a little “fishing” around in the pipe, using the rod, produced not only one, but two worn leather washers, the clacker valve and weight and also two iron rings that were presumably used to secure the bucket to the rod, below is a picture of what was removed from the pipe:

Next the pipe was flushed out using a hose pipe. The hose pipe was lowered into the pump pipe as far as it would go and the water turned on. What came out can only be described as “brown gunk”, but after several minutes the water began to flow clean once more. It was found that the water ran away fairly slowly, indicating that the valve at the base of the pump tube was largely intact. No attempt has been made to withdraw the valve for fear of doing more harm than good. At this stage it is not known if there is water in the well to a height at which the pump might work, this will only be known once the pump has been re-assembled.

The next part of the project was fabrication of the new steelwork. The main purpose of the bracket at the bottom of the case is to prevent any further damage to the pipe and spout by passing traffic, its secondary purpose is to support the new case. This bracket is made from 50mm x 12mm and 25mm x 12mm solid steel bar welded together using full penetration welds applied with a MIG welder. A new bracket was also made to hold the pump handle, this bracket was again made from 50mm x 12mm, 25mm x 12mm solid and 3mm plate steel. A roof structure was also made from the same materials, this was then covered with lead. The lead was formed around the steel structure and soldered in place using a blowtorch as the heat source, flux and off-cuts of lead as the “filler”. Great care had to be taken here as too little heat will not get a good joint and too much will result in the whole lot melting.

Finally a bracket was made to stop the handle banging in to the case and a new bucket was turned on the wood lathe, then finished by hand, to take the clacker valve and sealing washer. The steel work was painted using specialist metal paint, three coats of gloss finish in black. The lead roof was treated with patination oil to preserve and colour it. The existing handle and rod were cleaned of all rust and painted with the same specialist metal paint.

The next stage was to make the wooden case parts. These were made from oak, a mixture of English and French varieties. The basic format being a surrounding frame and central panel. The central panel is slightly smaller than the groove it fits in to allow for expansion as humidity varies throughout the seasons. These panels are glued using a waterproof external PVA glue and pinned with oak pins to prevent joint separation.

Two “acorns” were turned on the wood lathe and then cut in half to make the four adornments as shown in the picture above. These are held in place using PVA glue and brass wood-screws.

Also visible in the picture above is the lead plaque to go on the front of the case, that being the middle panel in the picture above, in the recess at around two thirds height. This plaque will be bolted in place once the wood has been treated. Details of the plaque are below: 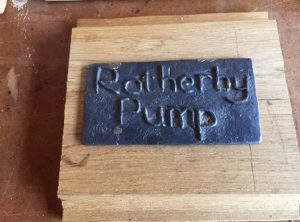 The plaque was made by carving the text (reversed) into a piece of oak, then pouring molten lead onto it, the lead was kept molten until all the mould was filled, using a blowtorch. Once all the mould was filled, the lead was allowed to solidify and cool naturally. The plaque was then given the “once over” with a brass wire brush before being treated with patination oil.

The wood casing was treated with three coats of “Sadolin Classic” in Mid Oak colour to preserve the wood. This will need to be topped up at three yearly intervals to maintain this colour and level of protection against rain and sunlight.

Once all the parts were painted, treated, etc. a trial assembly was undertaken on the bench. The wooden parts are fastened to the steel parts using brass machine screws, with tapped holes in the steel sections. The wooden parts are held together using brass wood-screws and brass countersink washers. This enables the pump casing to be removed, once all is in situ, to facilitate maintenance of the pump workings, etc.

This picture and the two on the next page illustrate the complete assembly during its build phase. The lower bracket has had the letters “AO MMXVI” added on the front, denoting the makers initials and the year of restoration. These were “written” using the MIG welder as a pen.

Above: the pump, minus its handle and workings. The next task is to fit the pump to the wall and test to see if there is any usable water in the well.

The various metal brackets have been attached to the wall of “Pump Cottage” using expanding bolts. The wooden panels were attached using brass machine screws and cup washers, this is to protect the oak from staining that would occur if steel fastenings had been used.

Finally the pump was primed with water using a hosepipe and tested. All the valves worked as expected and water could be heard to move from below to above the plunger. Sadly though after several cycles of the pump handle the pump could be heard to draw air, rather than water from the well below. From this we have concluded that there is no water above the lower end of the pump pipe in the well, so the pump will not draw water from the well at the moment.

We have discovered from other residents of the area that their wells and springs have dried up recently since a gravel quarry was opened a mile or so away. This pit has gone down 40ft into the ground and is being pumped to keep it dry. We have therefore presumed that this operation has lowered the water table. Since the pump last drew water in 1946, land drains have also been installed in the village at the time the mains water supply was added and this may also have effected the water table.